What does “energy deregulation” mean?

MZ: So John, when an energy market is deregulated in a state, what exactly does that mean?

JN: Let me turn back the clock a little bit. So back in the late 1980’s, the federal government allowed states to implement what they called “Choice” for natural gas. But it was up to each state to decide whether they wanted to do it or not.

That experiment produced extraordinary results in the states that implemented it. And the savings that the end users — mostly large commercial — realized was dramatic.

Then, in the late 1990’s and early 2000’s, the federal government deregulated electricity in much the same way. Each state got to choose.

MZ: So when you talk about purchasing electricity, we talk to our clients about different products whereas you don’t really get a choice with the utility. Talk a little bit about product mix and what products are available in deregulated energy markets.

JN: Well, if your business or home resides in a deregulated state, with gas and electricity you have the ability to purchase them in different ways.

There’s what we call “floating market” or “spot market” and you could also fix a price for some duration, whether it’s for three months or even out as far as ten years.

If you’re using the utility — whether it’s a default service in your state or your state doesn’t offer choice — the utility almost always provides some kind of variable rate. It is subject to the market and subject to change.

So the products that have been created over time in response to how the utilities provide their prices are generally around fixing a rate. Fixing a rate is the tool that probably 95 percent of customers in deregulated markets use.

MZ: And part of that product mix, too, is green energy and sustainability. Can you talk about that?

JN: When consumers have choice in deregulated markets, it’s proven not only to provide savings but also budget certainty. That means that customers now know roughly what their total cost is going to be for energy.

But a newer reason why people want to be in deregulated markets is that they can choose whether they’d like to go green or not.

Unfortunately, there are not many green options for natural gas — it just doesn’t exist that way. But in electricity, “going green” means that you could be buying your electricity from a renewable source — like solar, wind, water, or waste.  By doing so, you’re aiding the environment.

These are generally not options that you have when you’re operating in a regulated market.

MZ: We’ve helped a lot of our manufacturing clients achieve their sustainability requirements by buying Renewable Energy Credits (RECs). In these deregulated markets, people have been asking about RECs a lot more recently as well.

Which states have deregulated energy markets?

MZ: Some of the states or areas of the country are deregulated. Would you mind talking about which ones?

JN: What we saw with natural gas is that the states that were heavily populated with manufacturing were the 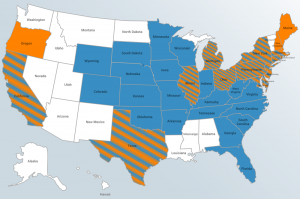 first ones to adopt deregulation. So think about the Midwest and the Northeast. Since natural gas has been deregulated longer than electricity, it has spread a wider net.

So about half of the states in the nation have opportunities end users — whether it’s for commercial, residential, or both — to choose for natural gas.

On the electric side, probably 13 or 14 states are offering choice. Again, a lot along the Midwest to Northeast corridor, California, and certainly Texas which is the biggest market by far.

MZ: So, obviously, states have deregulation available. We get asked all the time by customers about why their state isn’t deregulated. What are some of the benefits that you see to deregulation?

JN: Well, the evidence is absolutely conclusive at this point. The end users in states that have implemented choice have realized lower costs.

The best example is Illinois versus Wisconsin. Illinois deregulated electricity early in this process. Wisconsin never deregulated. Before deregulation, businesses were leaving Illinois and flocking to Wisconsin because they wanted to take advantage of the lower electric rates.

That has since ended. Wisconsin’s electric rates today on average are probably 20-30 percent higher that what they are in Illinois. Being neighbors, we source our power from the same places. Nothing else has really changed. The only thing that has is the fact that Illinois offers its businesses and homeowners choice, and in Wisconsin they don’t.

MZ: Sure. And some other big advantages besides the lower prices are product mix like we talked about and budget certainty. But there are the naysayers and those that talk about the downsides of deregulation. What are your opinions on that?

JN: The downside of it is that the utilities lose some of their monopoly. So most of the doubts that have been cast about deregulation and its effectiveness have been by those people representing the utilities, who have a vested interest in leaving regulation in place.

The stakeholders are the legislators, politicians, and utility companies in those regulated states, and they want more of the status quo.

In other states, the stakeholders are the end users and they have a voice.

There’s really no downside. We haven’t seen a market that’s re-regulated. At one point, California re-regulated and now they’ve deregulated again. But otherwise, no market has and in fact several states are actually pushing for deregulation.

The Carolinas, Florida, Arizona, Virginia are the most recent ones moving toward deregulation because they know that the benefits to the end user work. And they need to make their state competitive if they want to attract businesses and employment accordingly. They have to be able to make it a better business environment, and what better way to create that environment than giving them the opportunity to lower their energy costs?

The only other downside is in the residential market. There’s been some less-than-scrupulous players that have gone after less-informed consumers and taken advantage of them by putting them in higher rates than they otherwise would be paying.

It’s a bad practice. The states’ attorneys have aggressively gone after those companies, and we as an industry have self-policed aggressively. So to say that no one has ever been harmed by this would not be true.

Aside from that, deregulation is mostly a positive. In Illinois, for instance, almost 98 percent of all the businesses that have a choice are actually taking advantage of it. That means they like it.

MZ: Absolutely. And we’ve seen the overwhelming savings and positivity from our clients in our market, but in the other states that also have deregulation you can see the big impact it has on their bottom line.

Any other general thoughts on deregulation? Anything else you’d like to touch on?

JN: Well, deregulation has brought choice to end users. And that choice comes with options. How long are you going to fix a rate? Do you want to use a different product than the utility company is offering as the default?

But the most recent benefit is that end users can choose to go green now whereas they didn’t have that option before. So whether you’re a business or a resident, you can buy your power from a sustainable source, and that’s kind of cool. It doesn’t exist in natural gas per se — we haven’t figured out how to “green up,” if you will, natural gas — but we’ve certainly done that in electricity.

MZ: Well John, thank you very much for your time today. It was a great conversation on deregulation. And thank you all for watching! If you’d like to learn more about options in your state, please feel free to reach out to us or visit our website.